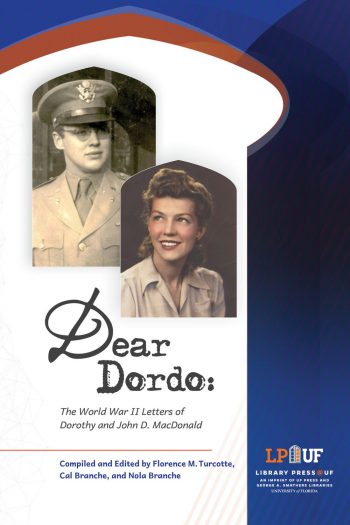 John D. MacDonald was a prolific writer, authoring 78 books that have sold more than 70 million copies. Many of his novels published in the 1950’s were set in Florida, as were several of his 450 short stories and the well-known Travis McGee series. Dear Dordo: The World War II Letters of Dorothy and John D. MacDonald presents a collection of 175 letters exchanged between John and his wife Dorothy (known as “Dordo”) between May 1943 and June 1945. These letters provide a fascinating and honest account of life during World War II from a husband in the U.S. Army and a wife on the home front.

Through John and Dorothy’s correspondence, readers will learn about John’s experiences in the U.S. Army (based first in India, and then, as a commander of an OSS unit, in Ceylon) and Dorothy’s experiences as a supportive spouse back home in Utica, New York.  The letters animate how John and Dorothy dealt with the personal concerns and themes of their lives, separately and as a married couple, and demonstrate the difficulties of wartime separation of husbands and wives. The letters also tell the story of a wife’s efforts on behalf of her husband abroad that launched a heralded literary career that established a new twist on the hard-boiled detective novel genre of American writing.

The letters compiled in Dear Dordo are framed by a preface, an introduction, editorial notes and a glossary. These materials provide unique and essential context to the content of the letters. Fans and scholars alike will find much to consider and analyze in this collection.