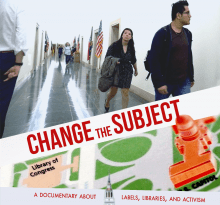 As part of celebrating Hispanic Heritage Month, join libraries statewide Tuesday, October 13, 2020 for a film screening and panel discussion centered on the power of words in the library catalog. Change the Subject tells the story of a group of students at Dartmouth College, who from their first days at Dartmouth, were committed to advancing and promoting the rights and dignity of undocumented peoples. In partnership with staff at Dartmouth College, these students -now alumni – produced a film to capture their singular effort at confronting an instance of anti-immigrant sentiment in their library catalog. Their advocacy took them all the way from Dartmouth to the halls of Congress, showing how an instance of campus activism entered the national spotlight, and how a cataloging term became a flashpoint in the immigration debate on Capitol Hill. While the narrative driving the film focuses on the activism of students and library staff around a Library of Congress subject heading, the film extends into a meditation on the ways that language is often weaponized to divide and dehumanize people. Following the screening, the panelists will take questions and discuss what has changed since the film and what is left to do.

The film screening and panel discussion will be offered via Zoom online.

All are welcome to attend!

Jill Baron bio:
Jill Baron is the librarian for romance languages and Latin American, Latinx & Caribbean Studies at Dartmouth College.  She received her masters in library and information science from Rutgers University, an MFA in Creative Writing from The New School, and her BA in French and comparative literature from Bryn Mawr College.  She lives in Vermont with her family.  This is her first feature-length documentary film.

Sawyer Broadley bio:
Sawyer Broadley is a freelance and full-time video professional for the past 10+ years, lives with his wife and their cat in Massachusetts and works throughout New England. He received a BA in English and Film Studies at Dartmouth College (graduating in 2008). Sawyer enjoys working with educators, scientists, and businesses to tell stories that have positive impacts.

Jeanne Piascik bio:
Jeanne Piascik is the Head of Cataloging Services at the University of Central Florida. She served as a member of the ALA/ALCTS/CaMMS Subject Analysis Committee (SAC) Working Group on the LCSH “Illegal aliens.” The working group has produced a series of recommendations to address this and related subject terms.